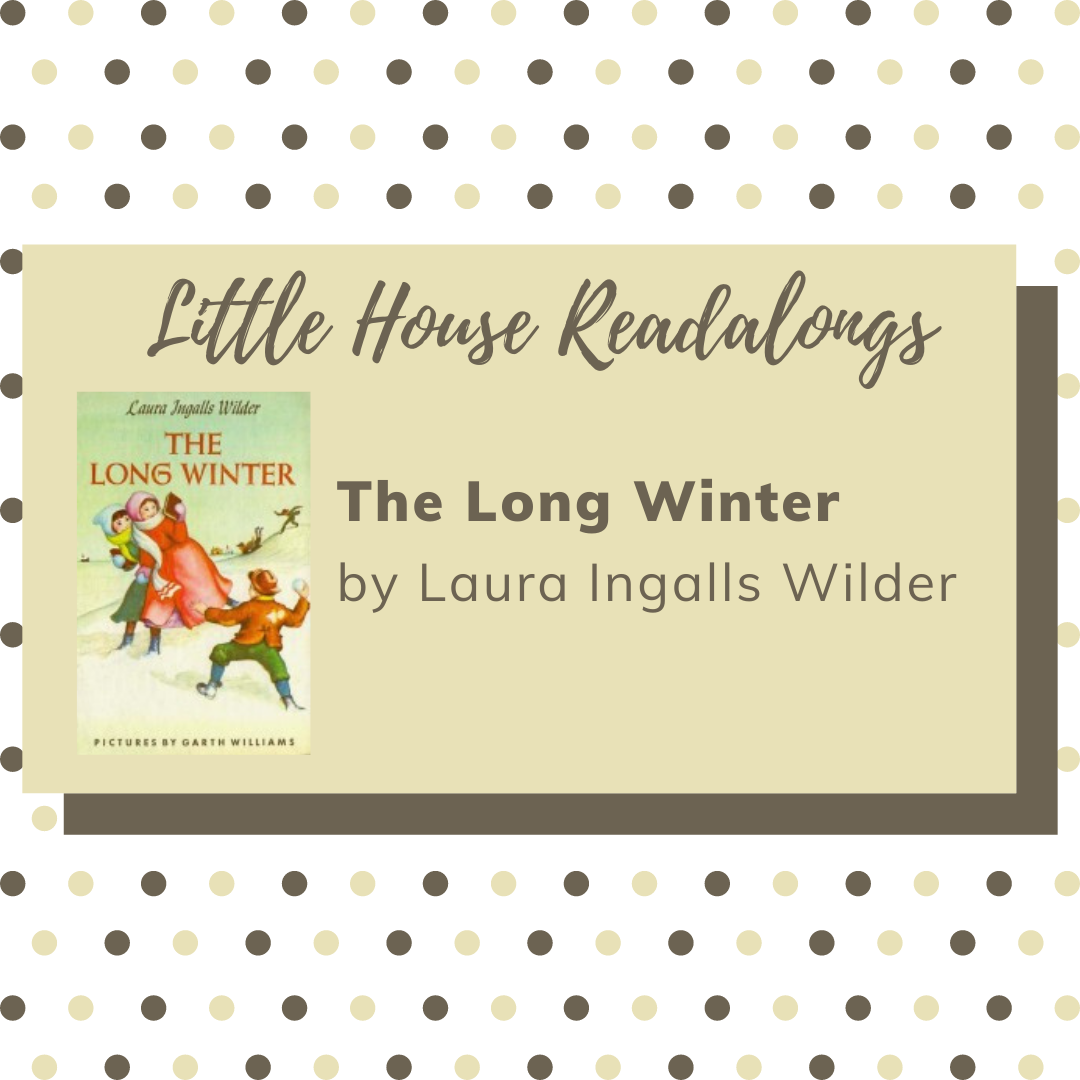 This chapter is pivotal in more than one way, and there’s so much said in just a few pages that to attempt to expound upon it all would be quite challenging. So I’ll just make a few comments, and let you all hash out the rest of it.
First, we pick up with the last frightening mile of the wheat journey, after the pause the last chapter created which only served to build tension in the first-time reader. Will Cap and Almanzo return safely to the town with the much-needed wheat, or will they perish in the blizzard that is chasing them across the prairie?
Laura has an amazing talent for causing the reader to feel intense emotions while the characters themselves remain seemingly nonchalant. “We’re in for it now,” is the most Cap or Almanzo either one have to say about the perilous situation they find themselves in.
When the two men do make it to town safely with the wheat, the reactions of the others are similarly dispassionate. Look at Loftus’ reaction. No rushing to the door to greet him, no excited reaction, no rejoicing that they made it back safely. He merely stands and says,  “So you boys made it; we figured you hadn’t.” And within seconds, his only emotion concerns the price that was paid for the wheat!
We know Loftus is somewhat of a scoundrel in this chapter, so could pass his reaction off as part of his character, but Royal’s reaction is pretty similar, and this is his own brother he must certainly have believed to be lost in the storm.
The motives behind the trip for each of the boys also come out a little more in this chapter. Almanzo tells Prince he saved the seed wheat. Clearly, Almanzo had no intention of letting people starve while he had wheat that could have saved their lives. This wasn’t about saving lives; those he would save regardless. It was about saving his wheat. His opportunity for future success, prosperity. It’s the “Farmer Boy” in his blood showing itself.
Cap says they made the trip for the fun of it. I would venture to guess that Cap’s family probably was in need of the food, and he likely made the trip at least in part for that purpose. But with a personality like Cap’s, I can’t imagine but that the adventure and danger of the trip is what made it so enticing for him.
I won’t make any political comments regarding what happens next — the scene where Loftus charges exorbitant rates for the wheat and Pa negotiates a better rate, and then the scene where the townspeople avoid a frenzied free-for-all and come to a fair distribution of wheat, by their own choice, willingly, not mandated by any leadership. But there are certainly plenty of conclusions to be drawn from this, and each reader may have a different interpretation of those, based on their own worldview and political thoughts. I’ll let you guys fight it out in the comments. 🙂  (Respectfully, of course!)
But no matter whether you agree with others’, or with Laura’s (or Rose’s) viewpoints or political beliefs, I think everyone will agree that this chapter, particularly these two final scenes, are nothing short of genius. If Laura is deficient in anything, it certainly isn’t critical thinking, logic, and reasoning skills.
This chapter is also the turning point of the book. Up until now, the overall theme has been survival, and the prospect has looked bleaker and bleaker as the winter has stretched on, and the food has run thin. Just this morning, the Ingalls family ate their final meal. If Cap and Almanzo had not returned with that wheat, there would be far more at stake for Laura and the family than the loss of these two outstanding young men.
But they did return, and at long last, we end a chapter on a positive hopeful note. That two bushels of wheat changes everything. Now for the first time since learning that there will be no trains till spring, there is hope.
They WILL survive this winter.

Yes, Almanzo saved the seed wheat. But I wonder if it also occurred to him that if he didn’t return from the trip, he wouldn’t be around to care about the seed wheat being eaten and that there would be two fewer mouths to feed. Bleak, I know, but things were pretty bleak by that point.

Interesting. I never thought about this scene as political, even in the context of RWL’s influence. It just seems a good lesson in doing business successfully.
I do love the drama here. It is, if I may make such a bold statement, the most dramatic Laura ever gets in the series. It’s the only nail-biting situation I can really think of, and she (or Rose — I am wondering about her dramatic influence here) does it to great success. And nowhere is the peril more up front to me than with this line: “Almanzo hated to do it, but he stepped onto the sled and taking the stiff lines from his shoulders he beat Prince with the knotted ends.”
I’ve always loved the image of the cloud blocking out the stars (though I guess that starts in the previous chapter). Also, this quote: “And let my horse stand in this storm?”
“Almanzo tells Prince he saved the seed wheat. Clearly, Almanzo had no intention of letting people starve while he had wheat that could have saved their lives. This wasn’t about saving lives; those he would save regardless. It was about saving his wheat.”
Wow. I never realized this, or never took the time to think about it, I guess. But you’re right. There’s his motive in his own words.

I had the same thought as Sarah – if they hadn’t made it back, Pa would have had plenty of wheat to tide them over until the trains ran again :).

The part about the townsmen in the store sharing out the wheat doesn’t surprise me at all, and not because of any political motivations. It’s pretty well documented that a number of towns affected by the train stoppage “shared out” their provisions in much the same way. Settlers (and storekeepers, I presume) pooled their resources and redistributed their supplies to help everyone make it through the winter. What a great example of a community getting together to help everybody survive!
I can’t imagine whole towns being cut off like these were, with modern snow-clearing equipment and rescue operations. But just for a moment, imagine if they were. Would people today open their cupboards to their neighbors who hadn’t stocked up as much at the grocery store before the storms hit? Would grocery stores fairly divide their goods based on who needed it most? Makes me think about giving just a little bit more the next time I’m asked about donating for a food drive…

I think that when a town is that small, it just tends to breed politeness and consideration more than when you are in a big place and everyone is kind of anonymous. Even though the shop keepers were in business to make money, when there’s only 80 people in the town there’s just bound to be a tighter connection. It’s a lot easier to pass up someone on the street asking for money than it is to deny your neighbor something he is in need of.
What amazes me is these 4 day blizzards… I just can’t imagine blinding snow for 4 days solid… does that really happen in the midwest? Did it ever happen? Has the climate changed that much?? I am in Pennsylvania and I have certainly never seen anything like that. Even this past winter which was the worst in a LONG time, there was never a day where you COULDN’T go out. You might not WANT to, but if you had to, you could.

Jodi, I can’t be sure but I think it’s very possible your questions will be answered in a presentation by Barb Mayes Boustead at LauraPalooza this summer! She works for the National Weather Service and is a Little House fan. How cool is that combo?

In a previous chapter Almanzo said his wheat wouldn’t keep everyone from starving, he had to get more.
I live in a 1,000 isolated town, I have been here for 6 years, in some ways I am starting to think it operates a little like an extended family.

Thanks for the shout-out, Sandra! Jodi, having lived in both Pennsylvania and Nebraska, I can tell you that the the winter storms definitely have a different character in the different places. Eastern storms have much less wind and much wetter snow. Plains storms tend to have a bit less moisture, but colder temperatures… so the amount of snow might be the same, but it’s fluffier and easier to get blown around in the wind. And there’s a lot more wind. It’s much easier to kick up even brief zero-visibility conditions out here because of that combination. Between land-use changes (more trees and buildings to break the wind) and some effect of climate change (though this is tougher to see, the coldest of temperatures might have been just a bit colder in the 1800s than they are now), it might have been easier to kick up those conditions in the late 1800s than it is now, also. Even then, it was tough to get 4 days in a row of blizzard conditions, though!

Today’s blizzards can also knock out the power, so I’ve been in the same boat for at least a day, and the roads may remain unplowed for a few; I’ve seen people leaving the local store pulling their haul on their kid’s sleds, and the owner was advising to spare the milk for families with small children. But there’s no risk of real shortage today.
As for dispassion: I think they were a lot less publicly demonstrative in those days out of a sense of propriety. Laura’s writing style paints a scene and you are supposed to assume the emotions on your own without the narrator spelling-it-out “ma was horrified while Pa laughed and I giggled and Mary sewed”.
If they met today’s Emos they’d slap a diaper on them or beat them over the head like martians.

LOL about the Emos…

This chapter has always stuck in my head as the perfect picture of small-town mentality. If the storekeeper rips everyone off with high prices in their time of desparation, all the townspeople will remember this and not buy from him when they have a choice. How different from today’s establishments! A few years ago we were on vacation in Williamsburg, Virginia, and decided to end the day with a hibachi dinner at a Japanese restaurant. It was a terrible, low-quality meal with hard, undercooked rice and frozen peas and carrots instead of freshly-sliced vegetables. We couldn’t believe that such a place could stay in operation, till we realized that all they needed was a steady stream of first-time tourists, who didn’t know about their poor food. No such thing in a town like Laura’s, where you knew every shopkeeper and their family. These days, employers may not even know all their employees’s names or faces, much less anything about their families. It’s so much easier to treat someone poorly when you know nothing about them. This makes me wonder if living in small communities is the best thing for people.