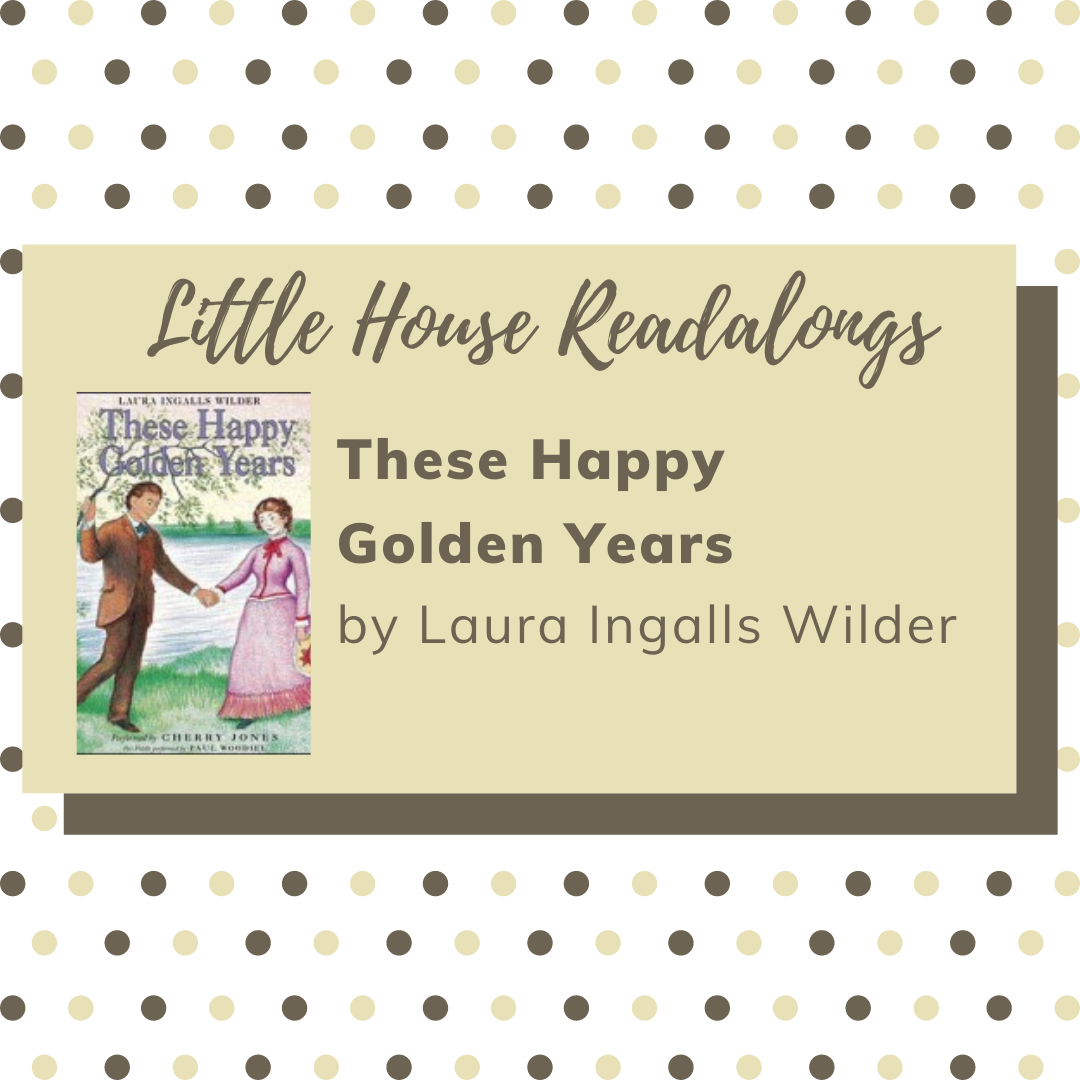 It snowed again last week, but I think that may be last one of the winter.  It was a nice, cozy winter, but I’ll be glad for spring.  Almanzo and I will take Barnum out driving over the prairie to see if he will still be gentle when hitched to a buggy.

School was out on the day it snowed, which Carrie and Grace enjoyed.  Not I, however, for that was the day of the teacher’s examinations.  Pa thought I might be nervous about it, but I was confident of the material.  What worried me was getting a good school – a larger one than I had last time, so that it would pay more.

Although I was not anxious about the examination, I did get timid when I went in.  You know how I have always dreading going among crowds of strangers, and the room was full of teachers I didn’t know.  In fact, Florence Wilkins was the only girl I knew!  So I went to sit with her, and found that she truly was scared.  She was cold as ice and even her lips were pale.  I felt so sorry for her that I forgot to be nervous myself.   It seems she was intimidated by the other teachers; most of them were older, so she felt they must know a lot more.  I tried to encourage her, reminding her that she knows the material and she has always passed examinations.

She was right, though – the questions were hard.  I was plenty tired even by intermission, and by noon I wasn’t sure I would even pass, but of course I didn’t give up.  I told the folks afterward not to expect much.  You can probably hear them now…”All you can do is your best,” Pa said, and Ma said not to worry over it until I got the results.  That was easier said than done, let me tell you!  It seemed that every hour I was telling myself to be patient.  You know that has never come easy to me!

It was a particularly trying week waiting.  Florence was not encouraging at all…she was sure only a few of the older, more experienced teachers passed, it was so hard.  And to make matters worse, Royal came down with the grippe, so Almanzo could not come on Sunday.

The results finally arrived on Wednesday, by post.  Ma didn’t open it, of course – that would be stealing my mail – and I was so anxious opening the envelope that my fingers shook, but it was good news: I got a second grade certificate!  I had only been hoping for a third.

I hoped that my good luck would hold out for a good school, as well. Ma said, “A body makes his own luck, be it good or bad,” and that I would surely get as good a school as I deserved.  So I began to wonder how to make myself some good luck.  I could not come up with anything, however.

But the next day at school, Florence told me that she had not gotten a certificate and so she could not teach her school, and she offered it to me!  It is a three months school, April through June, and pays $30 a month.  I could hardly thank Florence enough, but she said it was just a small repayment for having always been so nice to her.  So you see Ma was right, as usual.  I had made my own luck; I just hadn’t realized I was doing so at the time.

With love from your sister,
Laura

This is another chapter that shows how Laura is really maturing.  She is able to look toward, and plan for, the future, while still being content in the present “season” of life – both physically and figuratively.  You can see how her worldview is expanding and taking shape, not so limited to just her home and family, or to immediate needs.  (Of course, the family as a whole is able to think about more than how to get food on the table, finally!)  She is much more confident but not arrogant, and, although still not fond of crowds, is not quite so nervous among groups as she was previously.

I was curious as to what would have been on her teacher’s examination.  Knowing that so many of those “tests from 18xx” are not real, I was dubious of many claims I found.  However, this one from Arizona seems to be legitimate (see Appendix B):

Laura’s would not have been just like this, of course, but it was probably similar.  Yeah, I’m with Florence; it’s hard.

Speaking of Florence, I also wonder about the phrase she used, “I can’t teach our school.”  Who is “our,” and more importantly, what made it theirs?  I know it was very small, but it wasn’t private, was it?

[Please note, I have loaned my books to a friend who has never read any of the LH books [gasp!], so I can’t look up the quote exactly; but I am pretty sure she said either “our” or “my” because I have wondered about it.]

Don’t you love the idea that we are consistently “making our own luck?”  Many a time has that thought given me the extra incentive I needed to stay on the straight and narrow.  It’s one of my favorite Ma quotes.

These Happy Golden Years Read-along – Chapter 33: The Little Gray Home in the West

These Happy Golden Years, Chapter 32: Haste to the Wedding

These Happy Golden Years Read-along – Chapter 32: Haste to the Wedding

I have always been curious about the school system back in that time period. Especially, why did the Ingalls girls not attend the Perry school that (I think) was closer than the school in De Smet?
Great idea for a chapter summary! I am sure many letters went back and forth to Mary at school and it is too bad none have survived.

I’ve always assumed that it was like today that several smaller “elementary” schools fed into the bigger town school. So little kids would go nearby while older kids would walk into town. Carrie and Laura would be bigger kids in DeSmet. The bigger school would have a more experienced teacher like Mr. Owens while the younger kids only needed someone like Laura or Florence. I don’t have time to look it up right now in Nansie Cleveland’s book about the property, but it seems to me that the Perry and Wilkins schools were about equal distance from town, just one was to the north and one to the south.

There is an excellent recap of the school system in Laura’s time at http://www.pioneergirl.com (click on the lower right icon with the image of a house that says “Teacher Laura” when you mouse over it). It’s very thorough, so be prepared to be educated!

Very good job! I have always wondered – even though the Wilkins school paid more, her “board” was deducted which meant that she netted LESS than the Perry school. Since she kept the money from the Wilkins school herself (or at least some of it), this has always puzzled me.

Yeah, the Brewsters would have had people lining up to pay money for the experience Laura had there. 😉
I imagine it seemed like they chose to hire her out of several prospects where as the Perry school was so close that she could have felt like they had to ask her as a favor to Ma and Pa or some such thing.

I would have asked for my money back if I had to pay R/B at the Brewsters-the whole knife thing was too creepy and unless you like horror Laura more than earned her money!

IIRC, (I don’t feel like digging out the book to check) once her board was deducted I think she even earned less (or just about the same) as she’d earned at the Brewster school, where they didn’t deduct her board.

She received $20 a month at Brewster’s, no board deducted. $25 a month at the Perry school with no board because she stayed at home. She made $22 a month at the Wilkins school after the board was deducted. So, apparently the Perry school was most profitable even though she said she wanted a larger school that would pay more.
I read that the Perry school was discontinued after a few terms because the attendance remained low. Perhaps between the time the Carrie told her she could always have it and Laura got her last certificate, it had been closed. I don’t think she ever expected people to analyze what she wrote so closely, much less look up the real details of her life!

I think of that Ma quote all. The. Time. The older I get, the more on the forefront it is. The less I do things for personal gain, the better off my life and the lives of those I love.

Thanks for the shout-out, Barb! The website link with this post goes directly to my Dakota Conference paper on Laura’s schools; link at the bottom of each page goes to the next page. It will explain how the schools in Kingsbury County =worked=, where they were, etc. Originally, district schools were a few miles apart and each had their own school board. So the De Smet town school had a board, as did the Bouchie School, as did every other school in the county. In 1883, Dakota Territory switched from “district” schools to “township” schools, so that while there were the same number of schoolhouses, one board governed multiple schools in a civil township. Seriously, just read the paper … As for the Perry School, it was shortened because of lack of school funds that one term only (affected all schools, not just Laura’s). And although it closed for a while (too few students, and this was a common happening for most district schools as people came and went), it didn’t close permanently and was still being used in the 1940s and beyond.