Spring is here! Those of us who live on the Plains know the sense of relief all too well, how feeling mild temperatures and seeing green growth lifts the spirits. Warm weather arrived abruptly in mid-April after the last snow. Yet the town still waits for the trains, as manpower combines with nature to clear the snow and ice from the tracks. The snow has compacted, melted and refrozen, into a glacial pack that would take weeks to melt if left undisturbed. 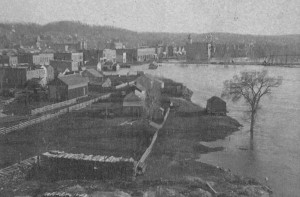 To make matters worse, all of that melting snow has to go somewhere –- again, something well known by those of us in the Plains and upper Midwest this year – and the fields and roads are flooded. In fact, the flooding following the Hard Winter of 1880-81 was as historic as the winter itself, with many towns along the larger rivers like the Missouri, Red, and even the Mississippi experiencing record floods due to both ice jams and snow melt. Many of the record crests from 1881 still stand today, and many towns along these rivers suffered extensive damage; in fact, several towns either moved their sites or were wiped out altogether. But I digress! Here in DeSmet, the main impact of the flooding is to prevent transportation of supplies over land, emphasizing their reliance of the stalled rail system. 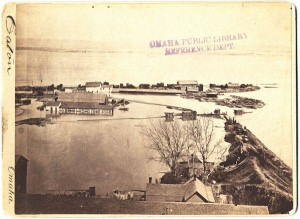 The winter has been hard on not only the health of the Ingalls family, but also their shelter, as the tar paper on the claim shanty has been shredded. Like so many other aspects of DeSmet life, repairs are stalled until the train can arrive with building supplies. To aid in clearing the way for the trains, Pa and other men in the area have been working to clear a smaller cut in between them and the still-stalled work train. He works until he shakes. Meanwhile, the family ekes out its meals from the last of the seed wheat. Supplies run low enough to scare Carrie into wondering if the family will be forced to eat newly sprouted grass to survive. (Perhaps her malnourished body is craving vegetables?)
Pa’s joke with Carrie about the grass has always intrigued me, standing out a bit from the rest of the dialogue. Nebuchadnezzar? When I read the book for the first time, sometime around age 9 or 10, I had to look that up… both the pronunciation and the meaning behind the allusion. I wonder if Pa is referring to the Hanging Gardens of Babylon, that Carrie won’t have to eat her way through the sprouting plant life. But Pa makes the joke with Carrie as a mere 10-year-old herself, and apparently, she gets it without having to look it up. It’s interesting what kids had learned at earlier ages back in the day. *
The morning of April 30 has a Christmas-like feel for the family, as the girls scramble to get ready (“Wait up, Laura, I can’t find my stockings!”) and Laura sings her way down the stairs. But they’ve all forgotten about the Superintendent’s stuck train, and it is this and not a freight train that passes through. Mr. Woodworth, the depot manager, breaks into the train to ration whatever goods he can find in the train, likely with the aid of several men who were expecting to supply their families that day. Pa bends his moral code to take some of the supplies home to his family, knowing they ate the very last of the seed wheat just that morning. It’s not enough to resupply the town, but it is enough to fortify the family supplies and break the wheat bread diet. Ma protests, but only mildly before she sets out to cook a proper meal for her family.

*Editor’s note: The “No, Nebuchadnezzar!” joke is in reference to the story of King Nebuchadnezzar in the book of Daniel. Nebuchadnezzar was proud and believed he was a great ruler all on his own, and although warned to repent, he did not, and as a result, was punished by going mad for seven years, during which time he actually ate grass!! When the seven years was up, his sanity was restored and after that he gave God the credit for making him a great ruler. So Pa was teasing Carrie by calling her Nebuchadnezzar for suggesting they eat grass, like he did. It’s a relatively minor story so it’s not surprising that many would not get the joke unless very familiar with Old Testament history, but as a Christian school kid, I knew it even as a child and got the joke then, so it’s reasonable to me that the Ingalls girls, having been raised with an emphasis on Bible reading, study, and memorization, would also have understood the reference, even at Carrie’s age of 10. ~Rebecca Brammer

Was I the only one who wondered if there was a town further down the railroad line that was expecting that food and needed it more than De Smet? Though I understand why they took the food.

At the point where they break into the emmigrant car (later, near when the real train finally shows) and Ma is so upset – I wondered who that car was really meant for – and what the heck IS an “emmigrant car” anyway???

Would have been a car where people traveled, much as Ma and the girls came out to Silver Lake on the train to meet Pa when he took the job with the railroad. Depending, the people either brought food with them or there was a dining car. They got off the train at the beginning of a blizzard and headed back to the town they came from, ending up spending the winter there. And the train was encased in a block of ice all winter. So when they finally got it going again (and it couldn’t turn around and go back, because no roundhouse there) it had to go on to the next town, DeSmet. And the town used the food that had been frozen on the train all winter.

Whoops!!! It was this chapter LOL. Serves me right for reading the comments before the chapter… I never really understood who that train was for. I think I once imagined “emmigrant car” (that is what they call it in the book) to be people moving west… and if they weren’t eating the food, was the train then full of frozen bodies??? That’s a lovely image for you.

http://www.hsp.org/files/studentreadinglifeontherails_revised.pdf
I googled it, and it sounds like it was the third class car. It was for the poorer people and also those making short trip. I might guess that Laura was saying they left the first and second class of any food for the train passengers, but took the third class food for the town.

That’s a Biblical reference I never got! I just figured “No, Nebuchadnezzar!” was a common part of speech, as we used to say “No Way, Jose” when I was that age. Glad to learn something today!

Me too Cindy.
If De Smet was a new town, I imagine Huron was the only other town at that point until they built more track and towns?
Pa’s moral code comes up in other places, wasn’t there a situation where the men took something into their own hands, like being their own police or law enforcement?

There was that part where Pa and Mr. Boast pretended to be law enforcement to get money out of someone… I think in BTSOSL? I think taking the law into your own hands was just what you had to do in that place and time, though.

I think that all those Bible lessons had to have helped the family endure such trying times. A big part of the Bible’s message seems to be “God loves you but life will often be awful anyway.” The story of Job is an obvious example, but life wasn’t a bowl of cherries for any of God’s followers. Maybe this helped the Ingalls family to hold on to their faith, that God would be looking out for them despite how grim things appeared.

Not to digress, but speaking of the moral code, I did read that the area around De Smet fell prey to a homestead killer who took in travelers for the night, killed and robbed them, and buried them in the back yard. Pa and the townsmen found out about it and went to the man’s house, and according to the book I was reading, something like Women Who Helped Settle the West, r, they quoted Laura herself as saying the men served justice on the killer. That is worth retelling here but I do not have that book at hand.

I think you are referring to the story of the Bender family who killed guests who spent the night at their house near Independence, Kansas. It’s a famous story (even inspiring an episode of the TV series Supernatural). Laura mentioned it in her Bookweek Speech. Rose used it as part of the inspiration for “Faces at the Window.” However, even a cursory examination of dates will show that Pa really couldn’t been involved in any lynching (which is what generally assumed happened to them although no bodies were ever found and no one actually claimed to be part of the lynching party even on their death beds) because the Ingalls family left Kansas before the Benders arrived and years before the Benders disappeared. I think basically Laura and Rose built a lot of assumptions around a knowing look Pa threw in to make a good story better.
http://www.kshs.org/kansapedia/kate-bender/11980

I got so excited today! I was watching a movie on Spike TV,.and there was a commercial with a girl from Huron, S.D.! It was some kind of public service announcement about her brother, and I was so excited I didn’t get to hear it. 🙁 They even showed the town water . My dh looked at me as though I’d lost it, and wanted to know what in the world…? I tried to explain, even showed him this chapter…oh well…