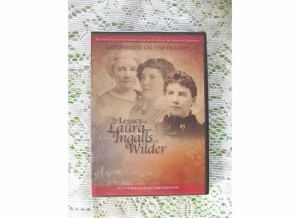 As was announced at the LauraPalooza conference, Dean Butler’s documentary Little House on the Prairie: The Legacy of Laura Ingalls Wilder is now in general release. Although it will continue to expand its distribution, for right now you can order your copy through the Laura Ingalls Wilder Museum in Walnut Grove, Minnesota. I checked with Nicole Elzenga of the Walnut Grove Museum and she reports “We should have it online by Friday. Toll-free is also better for pre-orders.” After Friday find it at their online store. Call them toll free at 1-800-528-7280.

I would also like to thank Dean Butler for all his work making sure this general release happened. Funding and distribution are the two biggest problems facing documentary film makers and most documentaries made are NOT ever generally released on DVD. It was only because of Mr. Butler’s efforts of exhausting every possibility for distribution until he made a deal with PBS which guaranteed a certain number would be purchased that made this further release possible.  So thank you Mr. Butler and PBS for making this happen.

Yeah! So excited. I thoroughly enjoyed Mr. Butler’s Almanzo DVD. Any ideas on what it will be price wise?

Wonderful news. I’ve been waiting for this. I couldn’t get to LauraPalooza, but I had friends who attended. Thanks for the update.

Woo! I know what I want for Christmas now!

so happy to be able to get a copy now. Thanks to Dean for all hi long hours of work on this.

I am not able to find the DVD. Please advise.

Check with the homesites. Last time I checked many of them still carried it in their gift shops.