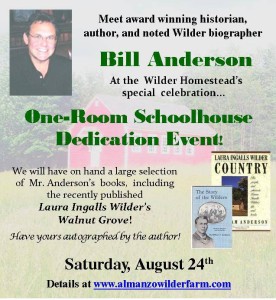 Beyond Little House: There’s already a book about Walnut Grove. Why the need for a new one?

William Anderson: It was 1987 when Shirley Knakmuhs suggested that Walnut Grove have a special publication about the museum’s history and that of the Ingalls family for their site. I was in a six-week seminar at the time, “Classics on the American West,” at the University of California-Davis. The seminar met only for two hours each day, so when I was not exploring northern California with my classmates, I worked on this publication for Walnut Grove. We were studying Willa Cather’s My Antonia, so I was certainly in the mode of sod houses, blizzards, Norwegians, little towns “buried in wheat and corn,” and frontier women losing their minds on the prairie.

So much more knowledge has accumulated since I wrote that first title! [Collections Manager] Nicole Elzenga at the museum has done an amazing job gathering just about everyting knowable about the people and places of “Plum Creek.” She shared material with me, and she and [Director] Amy Ankrum also suggested certain topics they wished me to cover. The museum has grown by leaps and bounds—a whole complex surrounding the original Depot Museum. And Stan and Hazelle Gordon have amplified the Plum Creek site and farm, ever so gently. It was time to revamp and update. I could not have done it without so much input from the museum staff and book designer Cerise Dixon.

Beyond Little House: How different is this new book from the original?

William Anderson: This book is a 96-page production with mostly color pages. It fits well with the Little House Guidebook. I tried to scrape the bottom of the barrel for some new images and data. Several holders of private photos and documents agreed to share them, anonymously. This is also the first book I’ve done that summarizes the television version of “Little House on the Prairie.”

Some other voices contributed to this book. Dean Butler (Almanzo Wilder) and Charlotte Stewart (Eva Beadle) wrote some wonderful anecdotal accounts of their lives on the TV show. I wanted to focus on the international appeal, so Yumiko Taniguchi and Eric Caron handled that. My family’s almost-lifelong friend, Jane Myers, tells of her family’s trek to Plum Creek over 50 years ago. They were about the first folks to take the trek to the sites.

This is also the first time that the illustrators were fully recognized.

Beyond Little House: How and when did you research this book?

William Anderson: The research was essentially resting in my files, other than all the “new” data contributed by the Walnut Grove Museum. I planned the book in my head for almost a year before writing it earlier in 2013. I have been to Walnut Grove so many times that it was part of my fabric, so I think the research was cumulative.

Beyond Little House: What interesting or cool thing did you unexpectedly uncover this time around?

William Anderson: One of my favorite sections was written by Stan Gordon, who grew up on the farm [that contains the Ingalls’ property]. He more or less settles the fact that the “wonderful house” can never be found, so let’s give up the angst concerning that unsolved mystery. Look around on all that great prairie and imagine it. That is what Laura Ingalls Wilder led us to do in her book.

I also realized that the development of Walnut Grove as a tourist place was like a long simmering pot. We owe much thanks to the Lantz family, who kept writing about this “children’s book” in their newspaper. Who cared about children’s books in a community where farming was king? And the quiet heroism of Della and Harold Gordon—they bought the former Ingalls farm for agriculture. They could have posted the place with “no trespassing signs” and ignored the people who wanted to stroll around their land. The Gordons typified a midwestern spirit of generosity and humble serving. They owed no one anything. I think that is a message in the Little House books: we are not owed anything. Our actions and kindness are expected parts of our lives. We make history; government or the public sector doesn’t.

Visit the gift store of the Laura Ingalls Wilder Museum in Walnut Grove to purchase the book or call 1-800-528-7280 to order.

I just ordered and finished reading this book. I enjoyed it! I learned many new facts and tidbits and thought the personal interviews were interesting.

I’ve convinced someone that it would be a good Christmas gift for me!

I tried to buy it in Malone last week, but although they had some copies, it hadn’t been entered into their computer system yet and they couldn’t sell me one. Oh, well,, I have a birthday coming up, and my very tolerant oldest son is always willing to buy me yet another LH related item.

Connie in Colorado 9 years ago

Yes, and when I was with Bill at the Wilder Homestead last weekend, they ran out of copies so I missed getting one! Have to buy a copy from Walnut Grove! Thanks for the interview with Bill Anderson….just goes to show there are still ‘Little House’ stories to tell.