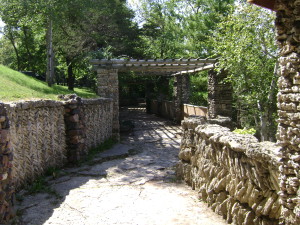 One of the most popular blog series ever on this site were the “And One More on the Way” series in 2010 and 2015. The posts in this series looked at places you might want to add as a stop either on the way to LauraPalooza or on any other Laura Ingalls Wilder trip.
These vacation stops aren’t usually something having to do with Laura, but make nice stops, a chance to stretch your legs and see something interesting. Sometimes they offer what travel writer Rick Steves calls “vacation from your vacation” where instead of rushing around you relax and soak up the atmosphere. Sometimes they will interest the non-Laura people in your party and keep them happier.
I did a series both in 2010 and 2012 recommending stops at everything from Blue Earth, Minnesota’s Jolly Green Giant to the Lincoln Highway. This year’s series is going to have to be a little shorter because there is so much else I have to work on, but I think in future I might have to post entries more often than just as conference lead up. I hope you enjoy them.
If you have suggestions for other places I should post on in the future please comment below.
Sarah S. Uthoff is the main force behind Trundlebed Tales fighting to bring the History, Mystery, Magic and Imagination of Laura Ingalls Wilder and other greats of children’s literature and history to life for a new generation.Attend one of her programs, schedule one yourself, watch her videos, listen to her podcast, and find her on Facebook,  Twitter, Google+, LinkedIn, and Academia.edu. She is currently President of the Laura Ingalls Wilder Legacy and Research Association. Professionally she is a reference librarian at Kirkwood Community College and director of the Oxford (Iowa) Public Library.

And One More on the Way, Sarah S. Uthoff, Sarah Uthoff, Trundlebed Tales
Homesites, Museums and Attractions
Registration Materials Are Ready!
Prev
You asked, We answered: Dorm Updates for Laurapalooza 2015
Next
Menu