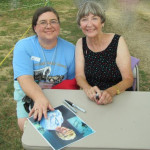 It sounds like they are pulling out all the stops for Wilder Days in Mansfield, Missouri. It’s always a great event with chances to do things that you can’t the rest of the year.

I made the trip to Mansfield during Wilder Days a few years ago for two reasons. First to get a chance to hear Pa’s fiddle played live and in person. Local fiddler David Scrivener plays Pa’s fiddle. Although you can sometimes catch Scrivener playing it throughout the year to help keep it in tune, this is the only scheduled public performance when you are guaranteed to hear it play.  (Request “Old Dan Tucker”; he knows it.) Second to get a chance to see the upstairs of Rocky Ridge Farmhouse. Normally the upstairs is not included as part of the house tour, but during this time they provide handouts with a self-guided tour with a guide stationed in each room and the spare room upstairs and first part of the hallway is opened up. Only the spare bedroom upstairs has been restored to the condition it was in when the house was occupied, but it was thrill to get to see at least even that extra bit of Laura and Manly’s home.

This year they have several more very special additions to those normal attractions:

They are pulling out all the stops (organ joke) as this is an extra push for their capital campaign. The current step in their long term plan is secure enough funding to build an archival library on the museum grounds. They think it will break ground in the spring and be ready to move materials in by the end of 2013.

The events are all scheduled for Saturday, September 15, 2012, events with specific times are listed below:

In addition, there are also things going on in downtown Mansfield, including:

Thanks to Kim Miller of the Laura Ingalls Wilder Historic Home & Museum for the information.

From my trip to a previous Wilder Day, it’s been a few years so somethings might have changed, but I thought I’d share some advice based on my experience. I arrived in town on Friday afternoon, but stuff really doesn’t get started full blast until Saturday morning. I did attend the Friday night performance of the pageant  and I would recommend that for a chance for a smaller crowd than the Saturday performances, of course you can go more than once. They also had several festival booths and some activities featuring local school children in the town square on Friday in the early evening. In addition to the parade there are booths of various kind including several of fair food, but they really only get started on Saturday. I thought I had the square experienced covered on Friday night, but driving by on the way out of town there was a lot more action and stuff going on Saturday. The Mansfield Mirror always prints a special edition for Wilder Days, but it can be hard to get.  The grocery store was sold out and the Mansfield Mirror building was locked up without even so much as a sign telling you where to find them, calls down there later trying to get a copy informed me that they have a booth on the square, but only on Saturday.

I really hope a lot of you will be able to make it.

Also I believe that Marie will be in Mansfield doing her Laura presentation at Laura’s Sweet Memories. (She has a very nice Laura blog here: http://allthingslauraingallswilder.com/)

I would like to know the dates for Wilders Days in September 2013, so I can plan to visit Mansfield with my granddaughter.
Thank you for your time. Sincerely, Jacque Green

I just checked with Mansfield and they say it’s always the third weekend in September.