As part of the build up to LauraPalooza we’re  sponsoring a “Where in Laura is that?” photo contest. Once a day between now and the start of LauraPalooza a photo will be posted on both the BeyondLittleHouse Facebook page and Twitter account. The first person to respond with the town the image is from will get a point (separate points available for Facebook and Twitter responses) and the first person to respond with precisely where the photo is will also get a point. For example, if I sent this photo. 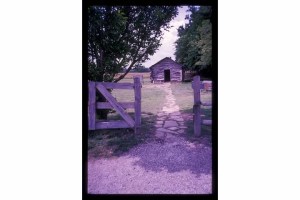 The first person on Facebook or Twitter to correctly identify this photo from Independence, Kansas would get a point. If the same or another person identified it specifically as the replica cabin on the museum grounds at Little House on the Prairie Museum site, that would also get a point. So 2 points are available on each platform each day. Points are only given to first person who replies with the correct answer. You can play on Twitter or Facebook or on both. One photo (the same one on both) will be posted on Twitter and Facebook daily. Time of posting will vary.  Rulings by the judges are final.

Photos from any of the towns Laura lived or has a strong connection to are fair game (so all of the homesite towns and places like West Branch, Iowa would be fair game too). No attempt at balance of where the photos are from was attempted because after I selected the photos from my Laura photo file I shuffled the possible photos several ways to get a good mixture, leaving some out each time. (So don’t think it can’t be Mansfield because she’s done too many from there, it just might be.)

The top 3 point getters will be sent a genuine, original, Trundlebed Tales postcard, only available through Trundlebed Tales and delivered proudly by the U.S. Mail and, more importantly, bragging rights all over the Internet.  You’ve already got a better chance than you should because I can’t play. Have fun! The first photo will go out late today.

UPDATE: After receiving 2 separate comments I feel a need to clarify. Yes, the photo above is the replica cabin from the Little House on the Prairie Museum site in Independence, Kansas. It says so in the post. It is  as an example. The actual contest is happening on our Twitter feed @BeyondLitlHouse and on the Beyond Little House Facebook page. There will be no points given for guessing the cabin in the comments to this post.

This is the replica of Laura’s home described in Little House on the Prairie.

Yes it is and I do say that within in the post, the contest photos are going out once a day on Twitter and Facebook under BeyondLittleHouse. The photo in this is just an example.

Sarah, are you just teasing us with this? I have yet to see a mystery spot??

So far I’ve done 4 photos. They are posted daily and at the same time on both our Twitter account @BeyondLitlHouse and on the BeyondLittleHouse Facebook page.

Home In Kansas if my eyes are correct