Céad míle fáilte
I have to tell you people that it is very difficult to write about blizzards as I am sitting only a few hundred feet from the Alabama coastline.  And before I begin, a Happy St. Patrick’s Day to all of you.
Seed Wheat is another short chapter.  The cold and the dark have come again and the days are long and monotonous.  It is difficult to imagine how cold the house must have been without insulation and only board walls standing between the family and the cold.  Pa must continue his twice daily trek to the barn to care for the animals despite the raging blizzard and bone numbing cold.  He returned so chilled that it was difficult to get warm again.  He held Carrie and Grace close, I assume not only to reassure them, but to borrow from their warmth. What would Ann Romines have to say about this? 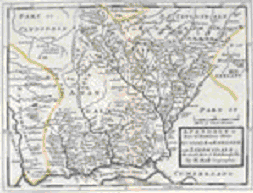 Eskdale and Liddesdale in Scotland

Pa shared the stories of bears and panthers with the little girls just as he had with Mary and Laura so long ago in the Big Woods.  At bedtime, the girls dreaded going up to the cold attic so Pa “played” them up the stairs with a Scottish Tune called “All the Blue Bonnets are Over the Border”.  As Pa played, the girls marched up the stairs to bed.  It is touching to read that Laura guided Mary up the stairs with Mary’s hand on Laura’s shoulder.
The recurring theme “and the trains didn’t come” crops up again as Laura worries that they have no meat, no lamp oil, no flour, no coal and no chance of the trains getting through.  It seems a lot for a 14 year old to have to carry on her shoulders.
Meanwhile, Almanzo was busy in Royal’s feed store.  Almanzo studded a frame for a wall on one end of the store and then built a wall part way up.  Once the wall was up, he hoisted a 125 lb bag of wheat on his shoulder and poured it into the space between the walls.   This always fascinated me that he thought to do this and later, that Pa could tell (oops that was a spoiler, wasn’t it).  A good natured brotherly argument ensues as Royal thinks that Almanzo should sell his seed wheat for a profit, not necessarily for the humanitarian good.  Almanzo refuses.  He wants good seed to plant a good crop once the winter is over.  He knows that Royal would sell his wheat if the price were right.  They argue back and forth as Almanzo continues to build his wall and pour his wheat.  You know, as I write this, I wonder why he didn’t just toss the bag behind the wall or lay them straight and build the wall in front? Wouldn’t it be easier to take it out in the spring if he had left it in the bags?   Did he want to be able to just take a little out at a time should he and Royal need it?  Does it make a better story to have the wheat loose in the wall?  Ah well.
There is foreshadowing at the end of the chapter.  Royal wonders what will happen to the town if the trains don’t come.  Almanzo speculates that everyone should be fine since they brought supplies out in the summer.  Oh, what he doesn’t know.  And the trains didn’t come.
Slainte!

I had the same thought re. bags vs. loose wheat last time I reread the book. My conclusion was that he must have build the false wall out just 6 or 8 inches from the real one, to be less obvious, and the bags wouldn’t have fit?

I suppose it conserved space, maybe the wall was not a bag width. I find it sad that the crop was so good and he bought so many things, then later on he had money troubles.

I was noticing that later we don’t hear about Royal and Almanzo grinding wheat into flour. They just continue to eat pancakes and syrup…
I’m thinking that the loose wheat might have been for drama. If it was still in the bags, it wouldn’t have poured out when Pa came and removed the peg. I’ll leave more comments for that chapter.
I’m amazed that the Ingalls didn’t start arguing with each other. If I was locked in a house with the same few people for months, it would get old quickly! No wonder Pa went to the store whenever the day cleared!

I don’t believe the detail of the loose seed was invented for drama. Have any of you ever built a wall? Almanzo studded out the original wall, say with rough-cut 2x6s, say every 16-18″ along the old wall, to be nailers for the new false front of the wall.
I lift 50 lb bags of grain every day and they are HEAVY. They are also more than 6″ thick and are wider than 16-18″. My 50-pounders would not have fit between any wall studding even stacked on end… and in the burlap sacks of those days Almanzo’s 125 lb bags would have been MORE THAN TWICE AS LARGE and dead weight.
Almanzo wanted to have a very thin false wall, surely at most 6-12″. If he had shortened the room by two feet, to lay bags on their sides, the discrepancy would have been apparent.
Cutting the bags seems like an obvious solution.

I think you are exactly right. That was also the normal way to store grain. In the grainary at our farm there are bins for grain with slots so you can create a “false wall” as you fill up the bin. I’m sure that’s what Almanzo was thinking of. I was just thinking of that at the De Smet pageant because their false wall had vertical boards and I’m just sure they were horizontal and he added boards as he filled up the bin.

Good eye, Sarah! Of course the boards would have been horizontal (nailed across the studs) and added as he filled. Trying to cut, heft, and pour heavy bags of grain would be hard enough without trying to fill the wall from a position near the ceiling! 🙂