Guest post by Barbara Mayes Boustead
The chapter begins on a hopeful note, on a day full of sunshine.  After the day’s chores, Pa heads across the street to hear the news.  He returns with 4 pounds of ox meat to supplement the family’s diet.  He has spent a fair amount on it, purchased from Foster at 25 cents per pound.  Surely he makes this extravagant purchase knowing the impact of the news that he heard in town, knowing that he must think of how the Ingalls family will continue to eat through the winter.
Pa reluctantly shares the news that the trains will not be running for the rest of winter.  Ma, somewhat uncharacteristically though certainly understandably, freaks out just a bit, fretting how they are going to live through spring without trains.  As in the good old days in the Big Woods, Pa spins a parable for the girls, weaving an entertaining tale that also teaches a moral lesson.  He also uses the story to make light of a rather bleak situation.  The story of the train superintendent evokes a lesson of the patience and perseverance needed to live in the West. 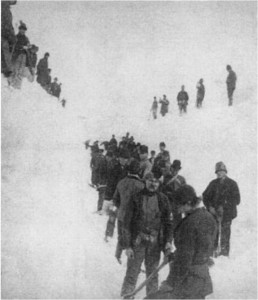 The series of blizzards has kept the train tracks covered in snow, with snow blowing into the cuts to the top of the last snow accumulation.  With little time between storms, crews have been unable to clear the tracks on the Chicago & Northwestern line, and trains have been unable to run.  The superintendent arrives from The East to figure out for himself how to keep the trains running.  Pa does give credit to the man for being willing to do the work he asks of his employees.  He takes over the operation, culminating in an attempt to ram a locomotive through an icy drift.
Was the superintendent wrong to give up?  Was there any method, any amount of “stick-to-itiveness” that would have opened the tracks?  Without modern technology, relying on shovels, picks, and steam-powered locomotives, the Chicago & Northwestern train company (and the settlers helping out) might not have had the tools to keep up with the weather.  Perhaps the superintendent opted to not risk the lives of his employees to spin their wheels on a fruitless task.  Or, perhaps he got frustrated and threw in the towel after his brightest idea didn’t work.
The train has not passed through De Smet since late December, and it will not return for about another three months.  Pa indicates that they “only” have to get through the rest of January and all of February, expecting spring to arrive in March.  Again, foreshadowing rears its head in the form of optimism, as winter conditions actually continued through April.  There will be no re-supplying the town.
Laura is mature enough to be aware that the current stores of food at the Ingalls house are not adequate.  With a squeeze of her arm from Pa, she understands that she must “stand by” Pa and Ma, setting an example of cheeriness for the rest of the family.  She leads the girls up the stairs with a song, then as a blizzard strikes, ponders the loneliness of the town, and each house in it.

So much adult responsibility was placed on Laura after Mary lost her sight! Now she must do her best to keep the girls cheerful when the news managed to scare the always calm Ma.
I’m not sure what the railroad could have done except to wait until Spring. As well, I guess we don’t know that the news wasn’t “until we have 7 clear days the tracks won’t be clear.” rather than “we are suspending everything until March 21st or later”

One thing that has struck me really forcefully, reading through this book slowly a chapter at a time – what a frightening and deadly situation they were in. Even though I sort of knew this reading the book as a child, having it drawn out for such a long time in this way makes each chapter more and more ominous. The fact that they did actually survive the winter seems more miraculous with each chapter that is presented.

I agree that by going through the book slowly like this gives perspective on how long that winter must have seemed. Living here in the south I can not imagine what they went through. My Mom (84) and Dad (93) talk about waking up in bedrooms with ice in a glass of water in the bedroom here in North Carolina. And being able to see through cracks in the walls. But in todays heated homes we can hardly comprehend what the cold and hunger must have been like. I plan to stage a weekend of no electricity and modern items this summer for my daughter (age 11) including cooking over a open fire but wouldn’t dare to try it this time of year. This site has been wonderful. I plan to have a Little House summer of study for my daughter. I hope you will continue these book chapter reviews on other volumes of “Little House”. Joan

I recognised an perhaps old-fashioned attitude in Ma in the previous chapters that I have noticed I my Mum. I think Ma thought that the government or whoever would fix it up until then. A sort of a crossness. You come across it with my Mum if you are worried about something that may happen.
I was trying to work out if a week is really a long time to have beef for, perhaps it may have been used for longer?
After the superintendent gave up there was a full day of sunshine, he gave up in the morning. Problem solving men may have stuck around for that day trying to figure something out. Not sure there was anything though.

Was the Superintendent wrong to quit so early? Look at the picture attached to this post. I’ve also seen pictures of trains that had snow piled in drifts taller than the smokestack on the engine. Also, think about shoveling your own drive way with only a few inches of snow and how heavy that snow is. Can you imagine having to toss that snow up over your head as you cleared a track by hand? The technology that existed was a large fan that acted as a snow blower. Once the snow was higher than the engine, where would that snow blow? I don’t fault the superintendent. In that environment, not knowing when the blizzards would hit again, why risk it? Yes, it seems cruel that people were starving and without supplies but there wasn’t much that the train company could do. I don’t think Ma thought the government would do something. That wasn’t her mindset. Entitlement wasn’t as big of a deal then as it is now.

When the storms strike the house again and again, Laura always thinks of all of the houses in town that are now basically alone in the world. You can’t see a light from any other building anywhere.
Pa’s building was across the street from a lot of the main stores in town. On that other side there were a row of stores strung together. I’m wondering if the people who lived on that other side of the street got together more often. I know that it would have been foolish to go out in the middle of a storm but if it let up a bit, one could go along from one store door to another to get to the neighbour’s.
De Smet’s main street is the widest main street that I have ever seen! Why was it so wide? No wonder Pa used a rope to go from his side of the street to get to the other.

Those streets were often so wide to allow a team of horses to make a u-turn. Salt Lake City is laid out like that.

I always thought Foster should have sold the meat at a much cheaper price, considering he cost them the antelope.