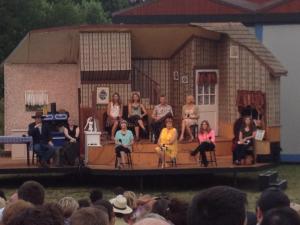 Wendy Levy recently attended the 40th Anniversary Little House on the Prairie Cast Reunion. Levy has been a fan of the TV show since she was 7 years old.

I grew up watching the series and have fond memories of it. I have seen every episode more times than I can count. They bring smiles to my face and tears to my eyes. It is definitely my favorite TV show. I am a huge fan.I have read “Little House” Books also many times. I can relate to Laura’s sense of adventure. I live in Iowa and work with children at several jobs including a before and after school program. I get great pleasure when I can share Little House with the kids. The reunion was very special it brought the books and T.V show to life. It was fun meeting the cast and seeing the Walnut Grove that Laura had once lived in.

I headed up to Minnesota with a friend and with much excitement. For the last month all I could think of was Walnut Grove.  I wondered what the small town would look like? What would the actors be like? What would it be like to meet the stars I had seen on T V all these years? Would they be like their characters? What would the other fans be like? How would the weather be? As I got closer to Walnut Grove the rain set in. I hoped this would not be the weather all weekend. As we arrived in Marshall, Minnesota, the weather cleared and we were filled with excitement about what was to come. 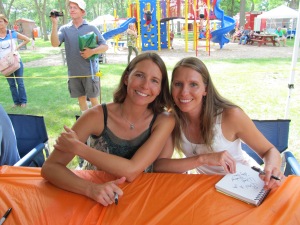 I remember my first impression of Walnut Grove was it doesn’t look anything like the movie ranch in California where they filmed the series.  It was pretty, but more of a small Midwestern town.  The first thing we did was to explore the gift shop. So many things to choose from bright orange reunion t-shirts with the cast printed on the back, coffee mugs with the reunion logo printed on them, Christmas Ornaments, Lunch pails, slates and bonnets and every book the cast had written and every “Little House” book you could dream of.

There were many activities planned over the next couple of days.  Two sets of guest speakers entertained large crowds in the City Park. On the first day we heard the Carrie and Grace twins. They briefly introduced themselves and then let people ask them questions. The Grace twins talked about Michael putting pepper in their food so they wouldn’t eat it and it backfiring. The Carrie twins talked about how they were both in the episode where they fell down the mineshaft. One twin fell down the shaft and the other came down the hill after being rescued. The Carrie twins said The God Sister was their favorite episode because they were in it together. Both twins talked about how when they couldn’t read, that other actors helped them out. The Carrie twins talked about how as they got older their hairstyles changed and how much of an honor it was when they were finally big enough to wear Laura’s dress. They both spoke of the kindness of Karen Grassley and Michael Landon and how nice the entire cast was to work with.

On the second day I heard the Victor French’s children speak. Victor French had three children a son and twin girls. The kids talked about how wonderful their father was and how much he liked to joke around. He would hide and when they came close he would jump out at them. They said he was kind and there never was any raised voices in their house.  Victor Jr., the oldest worked as his dads stunt double. He looked so much like his dad and had his dad’s mannerisms. He talked about what a joy it was to work with the cast. They concluded their speech by singing Old Dan Tucker. 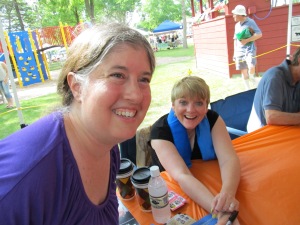 There were three autograph stations around town; one on the museum grounds, one in the empty lot across from Fond Memories, and one in the town park.  Eleven Cast members had come to the reunion; the actors who portrayed Mrs. Garvey, Nellie Olson, Almanzo and Eliza Jane Wilder, Henry Riley, John Sanderson and the Grace and Carrie Twins. I waited hours in line to get cast members signatures and meet them in the rain and in the summer heat. The hours went by quickly though because I met so many nice fans and we talked about our favorite episodes, our experience with the reunion and other “Little House” Trivia.  When we got to the front of the line the cast was so kind and down to earth. They signed items and took pictures and smiled and made small talk and thanked us for coming.  They all seemed happy to meet their fans. It was well worth the wait to meet and connect with the actors and create memories that would last a lifetime.

On both nights there was a pageant and the cast put on a pre-pageant show. There were two parts to the pre-pageant.  First the cast told what they had been up to since the show ended. Then there was a q and a. Adults and children alike asked excellent thoughtful questions. Fans asked questions such as what was each actor’s favorite episode was. They asked about if they had to redo an episode what would they do differently. They asked Alison about Nancy and Dean about Melissa. Right in the middle of it Dan McBride Came out and complained about the food.  Alison in character jumped from the stage and went chasing after him with a rubber chicken. She caught up with Dan and hit him with the chicken. You got the feeling from the cast by the way they spoke what an honor it was to work on the show and how close the cast was.

After a short set change the pageant started. It pretty much went through various scenes from the “Little House” TV Show and Parts of various books. It had many special effects including a real covered wagon with horses. It had singing and dancing. It told very colorfully the story of Laura and her family. 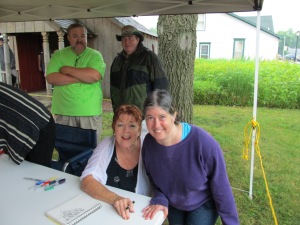 On the final day a huge crowd waited in line to either go to the Fire Department breakfast or get their picture taken with all eleven cast members.  The line went quickly. You could either sit between Alison Arngrim and Charlotte Stewart or stand in the back. It was fun having my picture taken with the cast. The whole weekend had gone by so quickly and I had memories that I wouldn’t soon forget. As we headed home my thoughts were next year in DeSmet.

Editor’s Note: Footage was recorded of the cast q and a and the Walnut Grove Museum is looking at the possibility of releasing a video for purchase in their gift shop. If it comes out we’ll let you know. In the meantime the Walnut Grove Museum still has some of the reunion souvenirs available for sale by mail order including a cast photo from the museum. -SSU

Cast party was a great event. Looking forward to Laurapalooza 2015.

Wow!!! The cast of little house after forty years…fantastic!!!!: D