Where I live in Iowa, we just survived our first big storm of the winter. (Which is a good thing because we were dry all summer and we’ve actually set a record locally for the longest time between snowstorms.) It got me thinking of Pa moving the family into town, laying in food stuffs, and starting to move haystacks into town. What do you do? 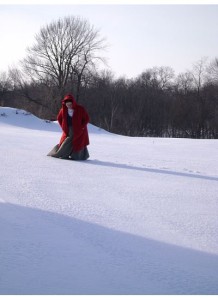 Breaking a Path to the School

Until a few years ago we laid in firewood and made sure the kerosene lights were full, but we have a generator now so that’s not so important. Laying in extra food for us and the animals so if we’re snowed in we’re fine and if we’re not at least we don’t have to carry in so much during the winter was already completed. So now we mostly make sure there is a shovel and grit in the house and pick up anything important (like buckets and feed pans) that might otherwise be covered by snow or blown away in a blizzard wind. I’ve also got to get out the snazzy new pair of snowboots that I bought this fall. How about you? How are preparing winter’s arrival where you live?

For me, it usually means that I get up early. We won’t get that much snow that we are really stuck in the house. But traffic will be horrible, and I have a 35 mile drive. I leave early so I can hopefully be on time or early, so that I can leave early to try and miss some of the mess on the way home.

There is no ice,
There is no snow,
It’s Christmas in,
San Diego!!
No preparations needed here! Although I did have to bring my hydrangea in the other night when it dropped into the 30s!

I live on the Mississippi Gulf coast. Getting ready for winter involves closing the windows at night because it sometimes gets kind of chilly. It’s a hard life but we manage. :)I

In Kansas we wait until the day before or of the storm. Then we all go to the grocery and buy milk, bread and eggs. Then we go home and wait for the superintendent to cancel school. We go to bed hoping for that 6 a.m. phone call. Usually we wake up disappointed because the snow went around us.