My baby boy spends most of the day on his feet. He’s got the run of a fenced-in pen that confines him nicely. He moves around the perimeter more gracefully each day, his chubby fingers solidly gripping the thin plastic grid of each wall. His eyes are on the future. I’ll find him standing almost stock-still, staring down at his clasped hands, concentrating on the art of standing solo. He’s oblivious to my presence. If he looked up? “Look, Ma, no hands!”

He smiles, he laughs, he giggles when I poke his stomach. He has eight teeth and eats tiny pieces of cheddar cheese and roasted chicken and banana that I cut up for him. He imitates the sounds for “Mama” and “Daddy” and raises his little hand in a robotic wave whenever his Dad enters the room. He nurses three or four times each day, and all night long. Sometimes I sit and stare at his pug nose and barely-there dimple, his long eyelashes and big, big blue eyes, all lit up with a smile before he bashfully plugs a fist into his mouth. Then I hold him close for so long he squirms to be free.

This is what Caroline lost.

I thought the same thing eight years ago, when my older son was this same age: just under ten months. Now, like then, it takes my breath away.

Charles lost him too, of course. As did the rest of the family. But I can’t help identifying with the mommy. She fed him, bathed him, changed him, held him, and slept alongside him for over nine months.  More than two hundred seventy days. This baby boy who joined a family of girls probably seemed out of place at first, but soon it was like he was always meant to be there … always would be there.

I see my two older kids loving on their baby brother, and I think of Plum Creek. Big sisters Laura and Mary probably challenged one another to make baby Freddie laugh. They held him safely while Ma cooked or was otherwise engaged, because he would have just been beginning to scoot around on his own. It was summertime before they left for Burr Oak; they probably brought him outside and entertained him while he sat in the sunshine and tried to eat blades of grass he had hidden in his fat little fists.

I leave him there with them, on Plum Creek. My mind no longer goes further than that.

Before I became a Mom I’d read about Freddie’s short life with a perfunctory curiosity and sadness, and not much more. He was only a baby, not grown like Laura or Mary or even Carrie. Medical care wasn’t what it is today and baby health was more precarious; what happened to him was not uncommon, after all.

Now, I also know this: none of that mattered to Caroline. Or to Charles. Or to Laura and Mary and Carrie. Freddie was their brother, this bouncy little presence who woke them up at night and had his own way of seeing the world, his own special smile. Maybe he was extra ticklish. Perhaps he sucked his second and third fingers instead of his thumb. He probably had a couple of teeth, his sisters watching for more the way they did bean sprouts in the spring.

They couldn’t imagine their family without Freddie, until they were forced to. And it wrecked them. 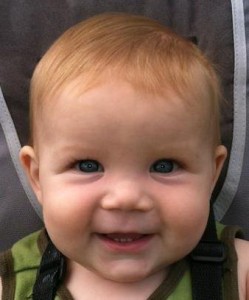 Laura has written that the family never fully recovered from Freddie’s death, and that all of their lives would have been very different had he lived. Once abstract, now that is almost too real, front and center of the biggest fears my mind can conjure. Of course they never recovered. You don’t. Even if the medical care isn’t there. Even if it’s not rare. It still crumbles your core and leaves you broken in a way that can’t be stitched together.

That’s what it seems like to me, and I’m only imagining. If it were my reality, I’m not sure how or if I could go on.

If you’ll excuse me, I have a baby to hug.

Thoughtfully and touchingly written, Sandra. It makes your heart ache for our Caroline. She went to a place no one ever wants to go, no matter how old our children grow.

This was a very well written post and it makes us think about the sadness of Caroline as she had to say goodbye to her baby. I’m sure that he brought so much love and expectation for the family as they dreamed for his future and for theirs as a family.
Isn’t it true though that he was a sickly baby or was that just near the end of his brief life? Perhaps he hadn’t met all of the growth markings that we associate with little ones (crawling, standing, walking etc) I’m sure that the family didn’t expect him to pass away but to slowly improve and catch up somewhere. It is so hard to imagine what the family and especially Caroline, went through. Thanks for posting this and causing us to think. Give baby an extra squeeze for me.

Hug that precious baby boy for all of us. It’s so hard to imagine what they went through with this loss; also at a time when they were losing so much else with their farm. Your post gave such a real visual to what they experienced.

You wrote my feelings in very beautiful words. I re-read all the books, in order, while I was on bedrest with my twins. Freddie was very much on my mind, my twins’ first year. I can’t begin to imagine the grief of losing a child, for all of the family. But especially for Caroline. I try to be properly grateful for the medical care we have access to, in our times.

When I heard about Freddie for the first time I cried. When I miscarried twice I was to later think about the child I had lost, never having seen his or her face and wondering how I could have gone on had the baby been born and I actually held him or her in my arms. My heart ached for Caroline.
I know that infants dying was very common in those days but with the symptoms that Laura named, and the manner in which he died (he stretched out his legs and died), does anyone have a guess at what could have been wrong with him?