Another post in the series of places to add on to your Laura Ingalls Wilder trip, whether you’re headed to LauraPalooza or just on your own. 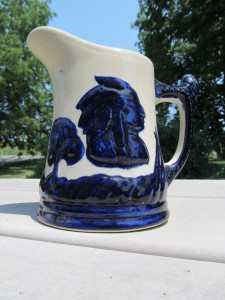 If you’re a fan of the NBC TV series Little House on the Prairie, then you’ve heard all about Sleepy Eye, Minnesota. Sleepy Eye was the small city in the area of Walnut Grove and they would often have plots that involved going over to Sleepy Eye. For instance, when Laura refused to marry Manly right away without Pa’s say so, he got mad, left town and got a job working for a Feed and Seed in Sleepy Eye, Minnesota.

Sleepy Eye is actually one of the real place names used in the show and while it looks nothing like the version shown on TV, it’s still a nice place to visit with an interesting history all on its own. Sleepy Eye is located right on Historic Highway 14, the Laura Ingalls Wilder Historic Highway, so if you come that route from the East (like Mankato), you will drive right through it. In fact the real Ingalls family also passed town on the way from Pepin to Walnut Grove.  See a video of my stop there during my last LauraPalooza trip.

Outside of Little House TV fans, Sleepy Eye is best known to antique collectors as the source of Sleepy Eye pottery. The town was named for a local native Dakota chief named Sleepy Eye or Ish-Tak-Ha-Ba. So the flour mill in town also took the Sleepy Eye name. To promote their products they put pieces of the pottery, which was designed with images of an Indian, teepees, and trees, inside the bags of flour.  Eventually the government made them stop because customers weren’t getting the full advertised weight of flour (the weight of the premium was being deducted from the amount of flour they got). However the pottery proved much more popular than the flour. The mill went out of business in 1921 (having started in 1883), but the original company contracted to create the pottery premiums kept on producing the Sleepy Eye items for sale until 1937. Today Sleepy Eye is so popular with collectors that many reproduction pieces, and new items designed in the same pattern, are produced. (Find images at the collectors website under the gallery tab.) We have one of the reproduction jugs because my grandmother remembers that her mother had a real one that she used to put their milk in every morning at breakfast. The mill itself still stands as the tallest building in Sleepy Eye and is now used for storage in private hands. A local man bought it to prevent it being torn down. I think it’s a shame someone doesn’t buy it and turn it into a Sleepy Eye pottery museum. Many people can say they’ve seen the pottery, but drive a little out of your way and you can say you saw the factory that started it all.

The other famous person associated with Sleepy Eye was a young artist named Linus Maurer, who left town to attend artist school in the Twin Cities. There he became friends with a classmate who went on to fame and fortune, Charles Schultz of Peanut fame. Schultz used Maurer as the inspiration for the Linus character in Peanuts. The Twin Cities wanted to honor Schultz, and following in the Cows on Parade program that worked so well for Chicago, they created a series of Peanuts characters each year and sold them off until the raised enough money to buy a set of permanent bronze ones. One of the Linus characters from the year they featured him now resides in front of what must be one of the cutest public libraries I’ve ever seen. Stop by for a visit. Sadly I haven’t made it back to Twin Cities to see the finished statues but there are photos of both the decorated and metal versions.

I remember the show and loved the series. Always check out the books from the public library