Although Laura fans have long been interested in the Iowa School for the Blind and Sight Saving School (ISBSSS) where Mary attended in Vinton, Iowa, for many years the interest was one-sided.
It was an active school and there were concerns about bringing tourists in and how they would interact with students. Now that the school functions more as a support system for students mainstreamed in their local schools, that has changed. Vinton is now actively promoting itself as a stop for Mary Ingalls fans. For some years now they have had a small museum put together mostly by retired staff and alumni volunteers, with some help from current staff. Two years ago they founded the Mary Ingalls Society and this year they had their first public event. They are planning even more including a full blown Mary Ingalls pageant the first weekend in August.

One way they are reaching out to visitors is commissioning a new sign declaring the school at Mary Ingalls Site. This sign will be put up near the entrance and will be a perfect place for visitors to take a photo of themselves with the school in the background. Last month they got final approval and released the design for sign. 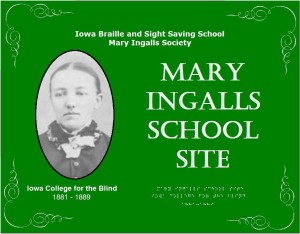 The society has gotten final approval from the school and an initial donation of $250 was made locally, but they are still looking for funds to cover the rest of the cost of the sign.  I look forward to getting my photo taken with it and I hope you will too.

Checks can be made payable to:

What is the address of the museum?I am planning a hypothetical road trip for a school author study.